A special gift for my newsletter subscribers: So Revealing Bonus Epilogue 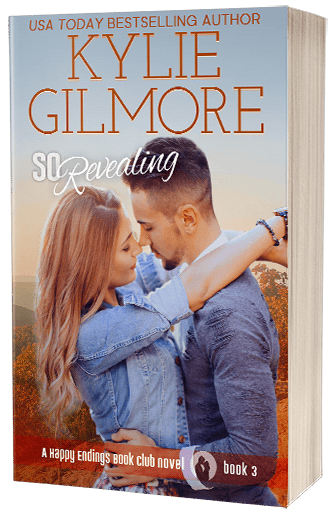 Ty carefully took his newborn daughter out of her car seat, tucked her in the cradle of his arm, and headed for the front door. No infant carrier for her. Just like with T.J., they wanted a lot of holding time with their kiddos either in their arms or in a sling. Charlotte was already ahead of him, holding two-year-old T.J. by the hand because the boy was a helluva runner. The baby was sleeping. It had been a long day; he and Charlotte had flown down to Louisiana the moment they got the call the birth mom had gone into labor. They’d spent a few days there, finished up all the paperwork, flew home and then picked up T.J. from his grandfather’s house.

“Yay! Play!” T.J. exclaimed the minute they stepped inside, jumping and reaching for the baby’s hand.

“Not yet,” Charlotte said. “You need to give her some time to grow before you can play with her.”

Ty took the baby upstairs to the nursery. Charlotte had a blast decorating for a girl—the furniture and walls were white with pops of pink color in the bedding, nursery glider chair, curtains, and area rug. Everything was coordinated and matching like in a magazine. He let her go nuts because she hadn’t had a chance to do all that with T.J. since she’d been on bed rest.

T.J. ran in with a Hot Wheels car in each hand, making his loud car noises. Ty caught him just before he tried to stick the cars through the bars of the crib. He scooped up T.J., turned on the baby monitor, and carried him out. “You and me’ll play, little man. Mackenzie needs her sleep so she can grow and be big enough to play with you.”

T.J. ran his car up Ty’s chest with a loud vroom!

Baby Mackenzie slept through all the noise. Already she fit right in. Even though Mackenzie was adopted, Ty couldn’t help but think the little girl resembled Charlotte a bit. She had a shock of dark brown hair, brown eyes, and light tan skin. Beautiful.

He set T.J. down in the family room, who immediately shot his cars across the hardwood floor in a race before running over to the small indoor trampoline with a handle and jumping crazy high.

Their house was all set up for fitness. Little T.J. had a ton of energy, and when they couldn’t take him outside, they let him loose inside. They were in a new bigger house, a four-bedroom colonial in Eastman, not far from his dad’s house, who they visited regularly. Ty and Park filmed three months of the year, three days a week for their show Hot Finds on the Turbo Channel. The rest of the time he helped Charlotte run her personal training business in a separate studio behind the house. He worked some on the business side and jumped in with a few clients of his own too.

Charlotte had grown close to his niece Viv, inviting her over to play with T.J. regularly on the weekends, giving Viv’s daddy and stepmom some couple time.

He turned on the baby monitor downstairs and then settled on the sofa, where Charlotte was slumped, eyes closed. He pushed her hair back from her face and kissed her cheek.

“How’re you holding up?” he asked.

She shifted, settling her head in his lap and stretching her long legs out on the sofa. “Tired but happy.”

He stroked her hair. “Me too. You think T.J. understands how long he’ll have to wait to play with her?”

She closed her eyes. “No. His sense of time is the length of a Sesame Street episode.”

This was true. Whenever they told T.J. he had to wait, he asked, “One Sesame Street? Two?”

Charlotte went on in a weary voice. “I don’t think telling him he has to wait for at least three hundred sixty-five episodes of Sesame Street will mean much. One a day, of course.”

Ty laughed. “Yeah, and he’ll probably want to watch them all right away.”

“Yup. Get it out of the way.” She yawned. “We’ll have to keep a close eye on him so he doesn’t give her choking hazards to play with or try to pick her up or something. She’s got that soft spot. Just never take your eyes off him.”

His gaze shot automatically to his son. Shit. He wasn’t on the trampoline. In the silence, he heard T.J. whispering through the baby monitor.

“Get up.” He pushed Charlotte upright, took the stairs two at a time, and nearly sprinted to the baby’s room. Charlotte wasn’t far behind.

He stopped short in the doorway and signaled to Charlotte to be quiet. T.J.’s arm was in the crib, holding the baby’s hand, and he was talking to her softly in his half babble way. He was just starting to string together sentences and all of his Rs, Ls, and Ss were only intelligible to people who knew him well.

“Cars and apples,” T.J. said earnestly. “TV, babble, babble, cars.” His voice rose to normal volume by the time he got to cars a second time. It was hard for him to contain his enthusiasm on the topic. They let him watch Ty’s car show and it had made a huge impression. The boy was obsessed with cars.

Ty exchanged a grin with Charlotte at his side.

Charlotte beamed. “I came before cheese,” she whispered.

Charlotte squeezed his hand. Okay, so he came after cars, apples, TV, Mommy, cheese, Santa, and a tree, but hey, he still made the cut. Before ice cream, even. Nothing like a kid to keep you humble.

He pulled Charlotte in front of him, wrapping his arms around her from behind as they watched their son introduce their daughter to the world. It was really sweet until T.J. got sleepy.

“Nap,” T.J. said and started to climb the crib. Charlotte grabbed him lightning quick. T.J. yelped, probably thinking his mom had superpowers the way she always anticipated his moves. The baby slept on.

T.J. struggled mightily to get down. “Nap! Baby!”

“She’s too little for that.” Charlotte shifted him and tucked him tight against her, chest to chest. “You nap with Mommy.”

T.J. immediately relaxed, his hand tangling in her long hair, his head resting on her shoulder. Charlotte took him to the glider, rocking gently and singing a lullaby.

Ty’s heart filled to bursting at the beautiful sight of mother and son. He imagined T.J. really needed his mom after they’d been away and brought a new baby home. Ty had only vague memories of his own mom, who’d left when he was only six never to return. It gave him such pride to know his own children had an awesome mom in Charlotte.

He crossed to them, leaned down to give Charlotte a kiss and then kissed his son’s chubby cheek, resting his hand on his head. He gazed at his sleeping daughter only a few feet away and let out a deep sigh of satisfaction.

Now their family was complete.

Don't miss the next book in the series, Formal Arrangement, a single dad-nanny romance!